Turning A Butcher Block Table Into A Bar Cart 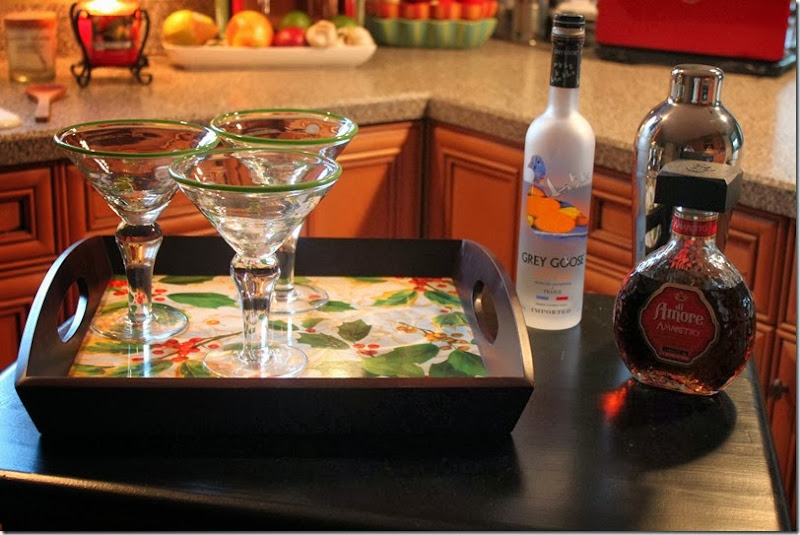 Goodwill can be a treasure trove but it’s a hit or miss proposition.   And I have been “missing” a lot lately when it came to finding something worthwhile there.    And then on particular day when my daughter and I were driving home from an afternoon of shopping I said “let’s pop in here and see what we can find” and I turned the wheel and quickly parked the car.   This awesome butcher block table was sitting all by it’s lonesome when I first spotted it.  But not 5 seconds after I saw it a man and his daughter started eyeballing it and giving it a very through look over. He seemed very very very interested.  He looked  it over top to bottom.  I could see the wheels turning in his head…kind of like the way they were turning in my head too. 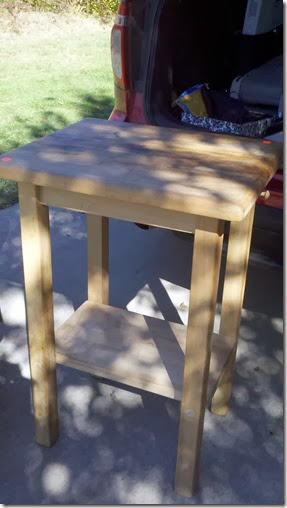 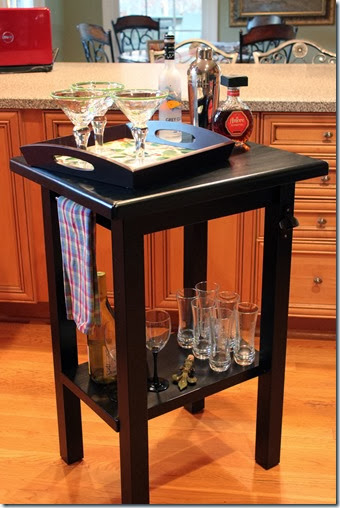 And then it seemed like he got my telepathic message as I willed him to “just move on…jut move on….you really don’t want that…you really don’t want that”… and miraculously he and his daughter did!  They walked away and inspected a few other things in the furniture area.  But as soon as he walked on, I sidled up to that butcher block place  a hand on top of it to stake my claim and instructed my daughter to go and get a cart while I stood by and guarded it.  It was extremely heavy but somehow we managed to balance it on top of a shopping cart and too it to the cash register.  I happily paid the $25.00 fee and we took it out and loaded into the back of the car.  I could easily see this being used as a bar table and thought I could fix it up for my daughter’s new apartment.   Kelsey liked the idea.  A lot.  : ) 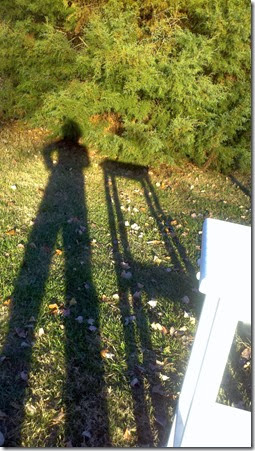 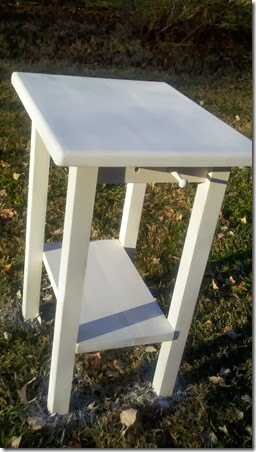 First step was to wipe the piece down with a cloth and I quickly sanded the top with a sandpaper block.  Next I sprayed on a fresh coat of Kilz primer to seal it.  The top of the butcher block was looking tough.  It had lots of dark spots, water marks, and what looked almost like scorch marks probably from setting hot pots and pan directly on it.

It was a nice Fall-ish day when I sprayed the table down with Kilz primer.  And the sun in the sky that day was making for some rather long shadows.  I am only about 1/10th that height in real life! : ) 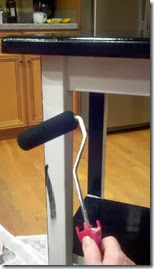 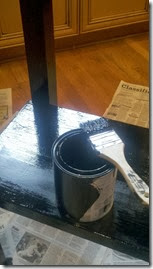 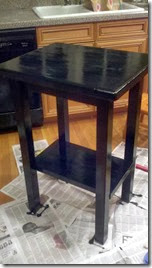 The days are getting shorter and it’s getting darker much earlier.  Colder too.  So I decided to bring the table indoors to paint and set up shop in my kitchen.   I used a black paint with an eggshell finish by Rustoleum.  A couple of very cheap brushes and my new favorite painting tool called The Whizz Roller!  These little mini paint rollers are so easy to use and control and make any paint job you have easier and faster.  I found mine at Lowes’ Hardware. 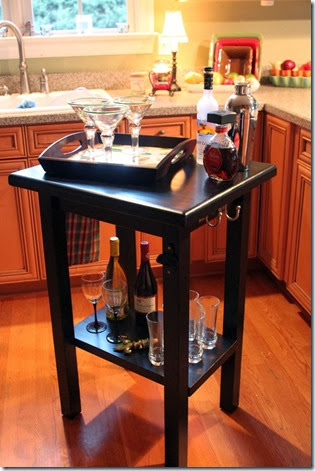 There were some very unattractive wood pegs on both sides of the table that I removed.  You can see them in the photo above when I painted it white with the Kilz primer.  I removed them and then wanted something to cover up the round holes left behind.  I found a couple of Hooks that had a square plate I screwed into the wood apron on the sides and they covered the holes nicely.  On the opposite side I added an extra wide bar drawer pull and mounted that directly over the holes on the other side and it serves very nicely as a bar to hang a towel. 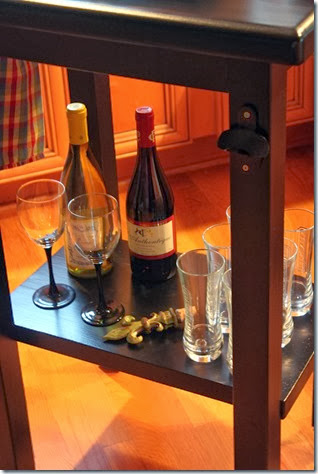 And then there my favorite piece of hardware that I found at Target…..a bottle opener that I mounted near the top of one of the table legs on the front. 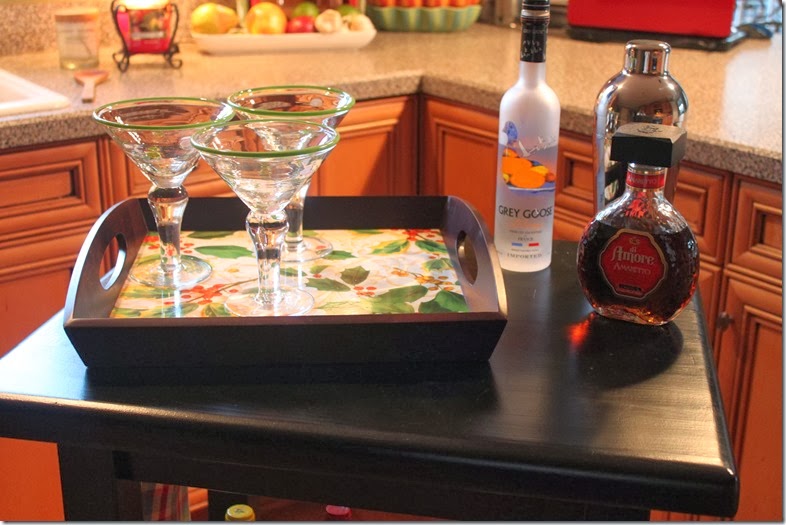 I really wish I could keep this.  But, alas, it’s already promised to someone else.  I’ll have to keep my eyes open for another one. 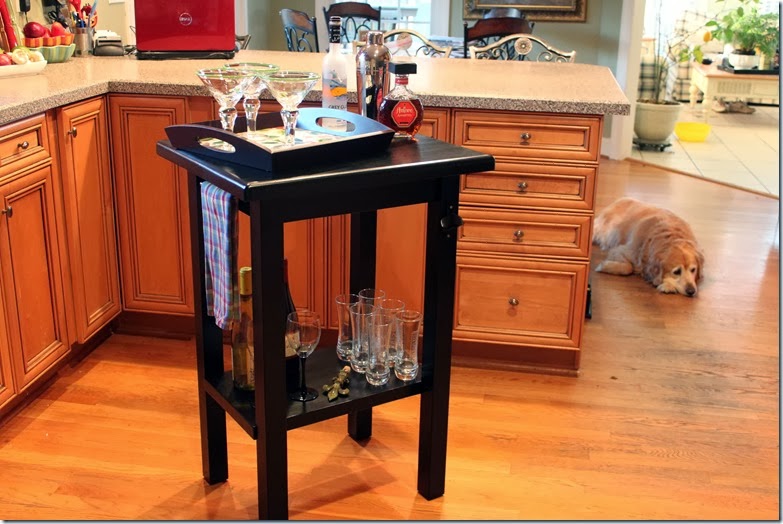