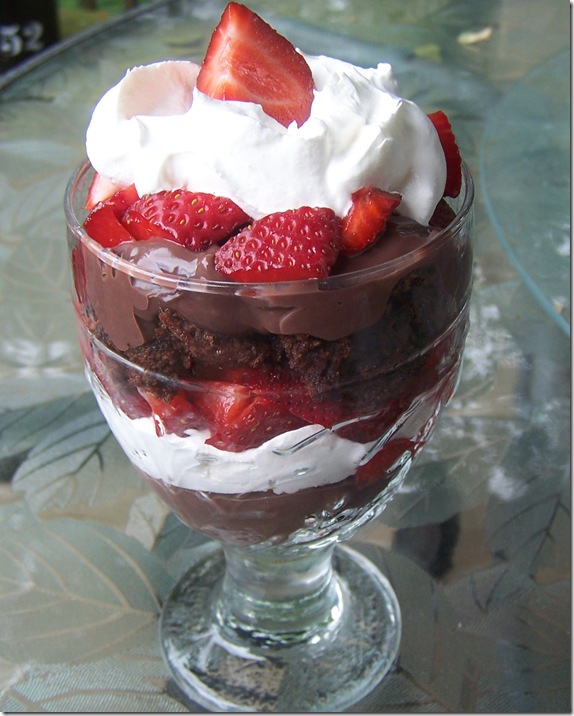 I had big plans for a great blog post with a recipe that was supposed to be quick and easy and used a store bought brownie mix.  Well, I couldn’t get the brownies out of the pan.  So I did what any enterprising cook might do and I scooped them out of the pan with a spoon and stared at the bowl of crumbled brownies until I could think of a way to not let them go to waste.  Individual Brownie Parfaits.  A giant trifle would have worked here too but since my son doesn’t like strawberries (I know…who doesn’t like strawberries???) and my daughter is away at summer school, and I didn’t want to be the one picking at a gigantic trifle for days on end, I decided to make individual sized servings.   I did something similar to this a few weeks ago just minus the brownies.  Here you go.

Bake up your favorite brownie mix.  Let cool in the pan.   Cut a serving sized piece of brownie and break half of it  into your serving dish.  I like to use my goblet glasses.  Scoop half of the pudding on top of the crumbled brownies.  Slice 3 or four strawberries and put on top of the pudding layer.  Then add a layer of whipped cream or Cool Whip.    Repeat with another layer of brownie, pudding, strawberries, and whipped cream/Cool Whip.  Top with a strawberry sliced in half.

Posted by Lisa@Pickles and Cheese at 2:08 PM

Oh Yum! Can this be served for dinner? :)

Nice save, they look great:@)

Right. I'll be right over! : ) Thankfully, I can make this, Lisa, since Betty Crocker has a gluten free brownie mix now. It looks delish!

It is a beautiful dessert, but I'm with your son...count me as no to strawberries. Brownies, yes - bring 'em on. :)

What a great dessert. I love the photo. It looks like a could reach in with a spoon and scoop out a huge bite full.

OK....if that brownie mishap happened to me I would have just stood there and eaten the broken pieces :) Your solution is much better and so much prettier!
My husband doesn't like strawberries either....I know, what's up with that!
Jane