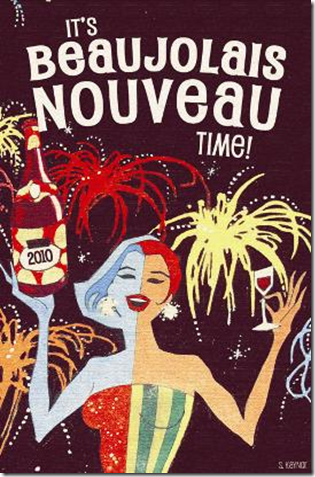 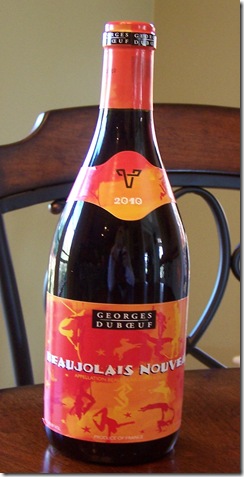 Technically I missed it.  Seems the Beaujolais Nouveau wine was released today but since the day is almost over…at least for me it is, I have to say that I missed it.    I should have remembered that it is usually released on the third Thursday of November each year.  There was a time some years ago when this was a very big deal.  People used to have Beaujolais Nouveau parties when it was released.  We used to attend those parties.  Now it seems you hardly hear about it.  Anyway, we usually try to pick up a couple of bottles and like to drink it on Thanksgiving.   Sometimes its very good and other times it’s rough going.   How about you?  Do you have fond memories of drinking Beaujolais?

1.  Beaujolais [BOE-zjoh-lay] Nouveau is always released the third Thursday of November, regardless of the start of the harvest.

2.  The region of Beaujolais is 34 miles long from north to south and 7 to 9 miles wide. There are nearly 4,000 grape growers who make their living in this picturesque region just north of France's third largest city.

3.  All the grapes in the Beaujolais region must be picked by hand. These are the only vineyards, along with Champagne, where hand harvesting is mandatory.

4.  Gamay (Gamay noir à Jus Blanc) is the only grape permitted for Beaujolais. While certain California wineries may label their wine "Gamay Beaujolais" this is not the same grape variety as what is grown in France, and is quite different in taste and growing habits.

7.  Beaujolais Nouveau is meant to be drunk young-in average vintages it should be consumed by the following May after its release. However, in excellent vintages (such as 2000) the wine can live much longer and can be enjoyed until the next harvest rolls around.

8.  Serve Beaujolais Nouveau slightly cool, at about 55 degrees Fahrenheit-the wine is more refreshing and its forward fruit more apparent than if you serve it at room temperature.

9.  Approximately 1/3 of the entire crop of the Beaujolais region is sold as Beaujolais Nouveau.

10.  The region of Beaujolais is known for its fabulous food. This quintessential food wine goes well with either haute cuisine or Tuesday night's meat loaf.

Posted by Lisa@Pickles and Cheese at 6:27 PM

Ooh I love all this info... I've only just started drinking red wines in the past few months- seriously! always just drank reds, but I realize I quite like a cab, and I've tried pinot noir and shiraz, I will have to check my grocery store tomorrow and get some of this to try. I always wanted to, it being from France and all (so close to home ya know) ;-)

In this period when we go to restaurants ...they have the beaujolais.... I don't drink any wine, but my habby thinks like you, that some years it's really good....but not always.... tomorrow we are going to some friends' home and they love good wine...probably there will be Beaujolais...I will tell you..the "opinion"..have a nice day, ciao Flavia

My husband and I were just talking about this last night. Like you we've had some great tasting Beaujolais and some not so great tasting.The bottle is suppose to be sort of pretty this year . I'll have to have my husband pick up a bottle today. Great post!!!

I'm a wine lover but I don't think I've ever heard of people throwing parties when a wine arrived, that sounds like fun. Maybe you can start that tradition up again.

I'm going to try that! Will my KRoger store carry it?
What can I bring to the in-laws for Thanksgiving? (They make fun of me for not being a real 'cook')