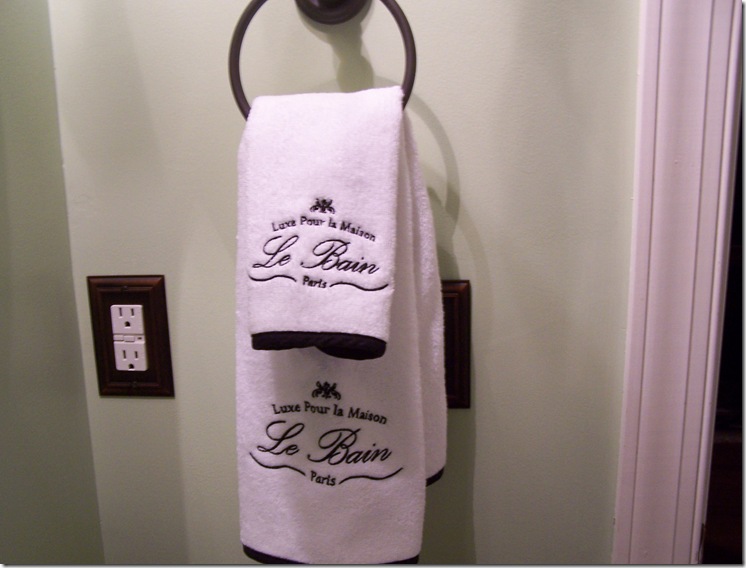 Picked up these little French cuties at TJ Maxx today for my powder room.  I love them!  My powder room has been a major work in progress.  This past August I decided that the wallpaper had to go. That was fun.  Especially getting all the glue off the wall after all the scraping.   It needed a major dry wall repair because the toilet paper holder that the builder had attached to the wall fell off that same wall the first year we lived here.  Whoever attached it gouged out a big hole by mistake and then tried to disguise it with the actual toilet roll holder…that is until the day it decided to fall off.  Thank goodness for Google, the internet, and Youtube where I found a fantastic tutorial on how to make the repair myself.  It required a  thin metal mesh that I found at Lowe’s Hardware, spackle, and lots of sanding.  But I have to say the wall looks good as new. 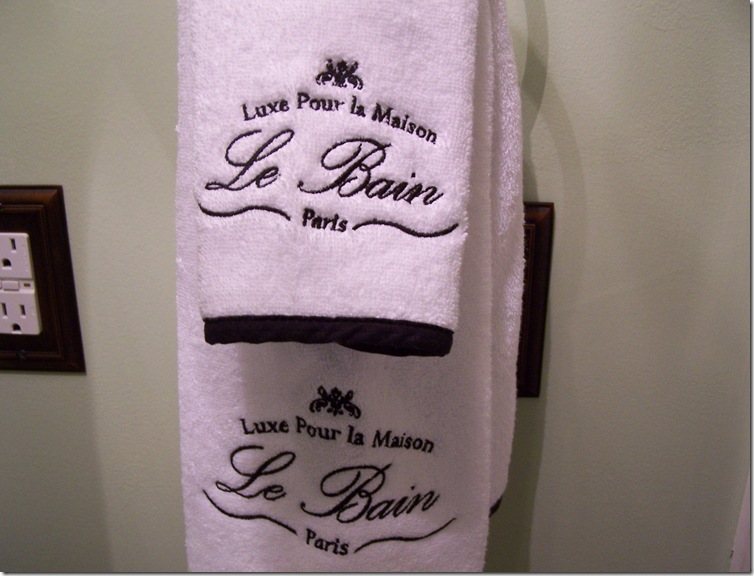 Three months later, I finally made a decision on color and I  painted the walls a shade called “Paris Green” by Valspar.  Of course I had to paint it that color.  I mean how often do you come across a color called “Paris Green”?  And so of course when I saw these towels today I had to pick them up.

I am in bit of a panic.  Next Monday night is my turn to host Mah Jongg.  Yep, I am still playing.  Not much better than when I started but I do enjoy it and have decided to stick with it.  And besides, Santa Claus brought me a beautiful set of Mah Jongg tiles of my own.  I have 10 women coming to my house.  I still haven’t decide what I am serving to eat or drink yet.  My house is a wreck.  Christmas stuff is still everywhere and my boss has decided that this would be a good week to put in some power hours.  Doesn’t really leave me as much time as I would like to get myself organized.  But somehow I’ll get it all done.  It’s only Wednesday and I am already fretting.  :) Wish me luck.

Posted by Lisa@Pickles and Cheese at 4:08 PM

Nothing like a house full of guests to inspire a cleaning spree. :)

Cute cute cute towels and yes, I can imagine you buying a paris green paint:)

If I lived closer, I would come and help you put your Christmas stuff up and then help you cook for your party. Good luck and don't overdo it.

Lovely towels for your Paris bathroom. You will some how manage to get everything done. I always walk around in circles for days when I should be getting ready for company or a holiday. The day before the actual event I run around screaming at everyone to help me. It always get done but its not pleasant.LOL!!

Good luck, Lisa! I know you can do it! Love the towels and I love the name of your bathroom paint color!

Your powder room paint looks a lot like mine, but mine wasn't called "Paris Green." I think I'll tell everyone that it is though! LOL!

I also use black and white in mine.
I love the towels and if I run across them I'm going to have to have them too.

Good luck and have fun at your party.

Sissie's Shabby Cottage said...
This comment has been removed by a blog administrator.
January 5, 2011 at 5:33 PM

Oh my. You have got a lot to do. I do my best work when I am stressing. Love the towels.

I can't believe you found those at TJ Maxx! They are so cute!

What adorable French towels. Think I'll go to TJM and see if they have them here. Wallpaper removal is such a pain. We've removed our share through the years and it's no fun.

Good luck Lisa. Don't panic and you'll be fine - coming from someone who always panics!
Sam