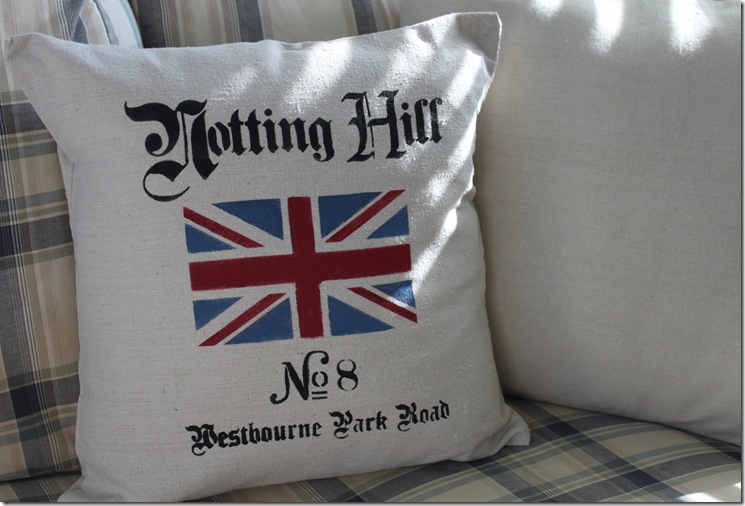 A new stencil from Maison de Stencils arrived not too long ago and here is the pillow that I decided to make with it.  This was the first time I used more than one color on a stencil.  And I got lucky with picking out paint colors I think.  I found some old acrylic craft paint (and I do mean old) out in the garage.  Both bottles of paint were colors from the Apple Barrel line of colors for Plaid.  Honestly those paints could be more than 10 years old!  But they were just fine after giving the bottles a few shakes.  The blue I used was called “Liberty Blue” and the red I used was “Burgundy”. 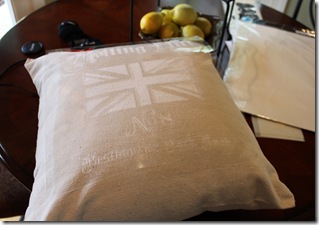 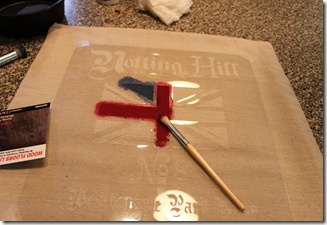 I had made a few pillow cases out of Painter’s Cloth a while ago.  If you would like to know how I made the pillow case you can click over see my brief tutorial on how I did it. Don’t worry, I had some help and in that post and you’ll find another link to a great sewing tutorial.

I removed the pillow insert before I started stenciling and I placed a magazine inside of the pillow case so that the paint didn’t leak through to the back side.    I found it VERY helpful to use three different stencil brushes…one for each color of paint.   I taped the stencil securely to the pillow case and worked on the flag first.  The edges between the blue and red on the flag were tight so I had to work slowly and carefully so that I didn’t get the paint in the wrong areas.  I find it best to use an up and down pouncing motion.  This helps insure crisp edges.  After I finished the flag, I started stenciling the letters with black paint. 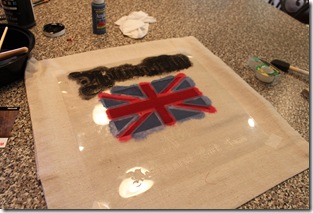 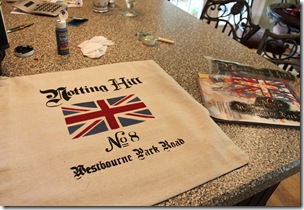 When all areas of the stencil were complete, I carefully lifted the stencil.  My favorite part of the process! 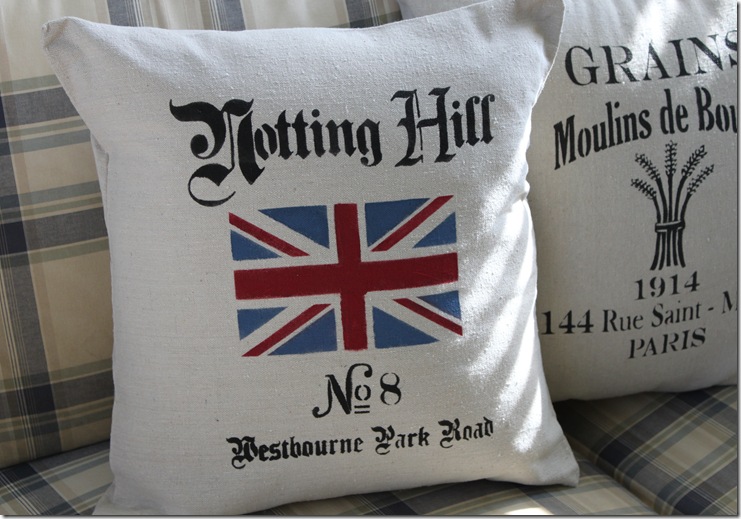 When the pillow top was dry, I inserted the pillow form back into the case.    I could easily be accused of being a Francophile and I have to admit a large majority of my projects have a French flare to them but I have a fascination with England as well and so you might see a few more Anglophile projects in the future too. 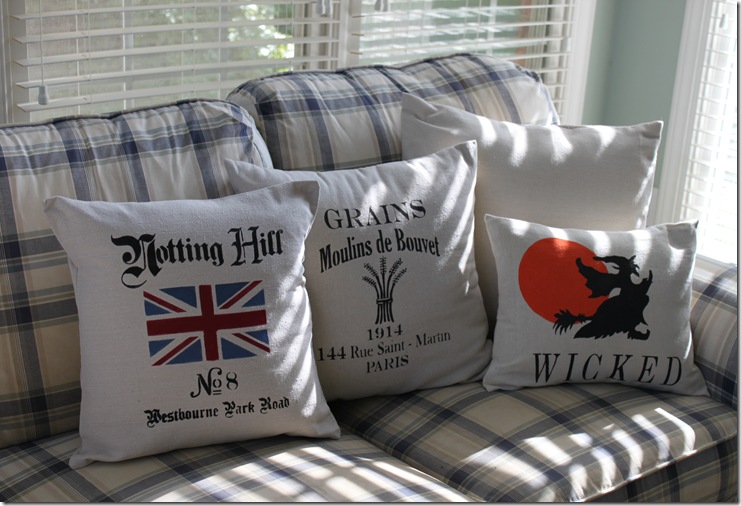 The stenciled pillow Hall of Fame. :)

That second French pillow was originally a Graphics Fairy graphic that I fell in love with and I sent it to Maison de Stencils and had a custom stencil made from it.  The wheat in the center had to be modified a bit  for the stencil to be easy to work with and Laura at Maison de Stencils was very nice and worked with me till we had something that would make an easy to use stencil.  (If you are new to my blog, I just made the witch pillow a few weeks ago from a stencil that I made myself.  You can link back to my post Halloween Stenciled Pillow and see how I made that one.) 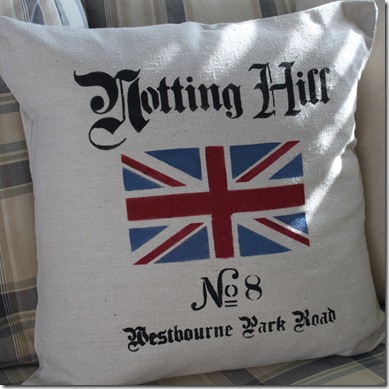 It turned out better than I expected.  I love it when that happens!

Posted by Lisa@Pickles and Cheese at 4:41 AM

It turned out great, Lisa! I love English things, too, even before French. The part where I lift the stencil is where I usually hold my breath!

You do such wonderful handiwork! Jealous here.

I just found your site as I was perusing this morning and I love it! You are sooo talented. I am you newest follower and I hope you will follow back! Have a great day!

You definitely have the stenciling thing down!! LOVE this pillow too!! I was going to quote the line from the movie Notting Hill that my husband just hates but I will spare you :) I got to go to Notting Hill for some flea market shopping when I was in London last summer.....great fun!!
Keep the pillows coming, I love seeing them.
Jane

Love your stenciled pillow!!!! In the future, if you like to stencil on fabric, you should pick up a can of Stencil Ease repositional stencil spray. It is Great for working on fabric..holds the stencil flat against the surface and deters bleed under AND you can pick it up and move the stencil around...very cool.

I used to work for a stencil professional and she taught me lot's of tricks.

All your pillows look so great on your sofa...well done.

Great job, Lisa! Don't 'cha just love stenciling on painter's drop cloth? It takes the paint so nicely. Thanks for sharing your great projects. Now, can I place an order for one of each! LOL

It looks great and so does all the other pillows!