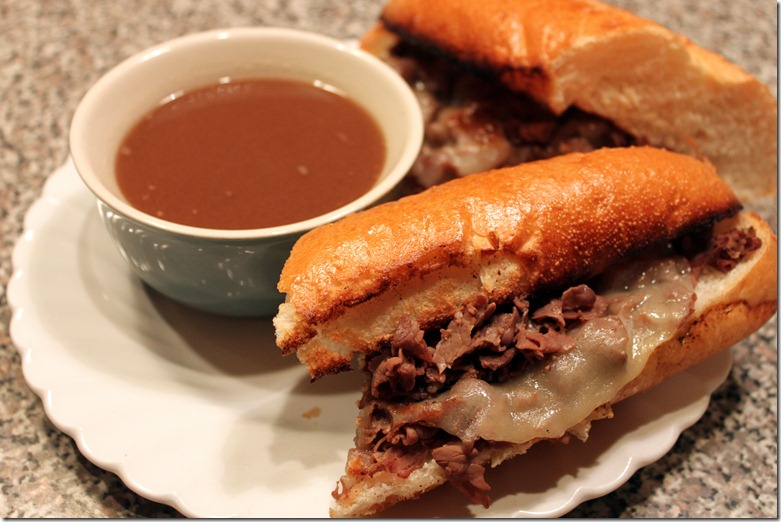 Things are really busy in the cheese world right now so I have been working a lot.  Yesterday when I was working at one of my stores, a neighbor that I haven’t seen in a while stopped by the cheese case.   She picked up a piece of aged Provolone and naturally I just had to ask her what she was going to make with it.  She told me French Dip Sandwiches.  She told me that she just started making them and her whole family loves them.  Quick and easy and I am all over that!  She told me how she makes them and I made them for our dinner tonight to rave reviews.

Here’s how to make them.  This recipe made 3 very big sandwiches.  If you have more people to feed, increase the amount of roast beef that you buy and make sure you have extra cheese on hand. 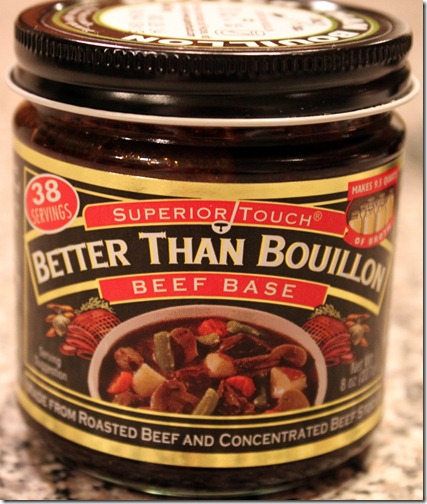 I picked up a jar of Superior Touch Better Than Bouillon Beef Base today at The Fresh Market and I have to say it made the most delicious au jus!  I would consider this a secret weapon ingredient, so if you can find it, buy it!

I chopped up all of the meat and gently pulled the chopped pieces apart so that I had a loose pile of meat when I was done.   I then set it aside while I prepared the au jus according to the directions on the jar of the beef base.  I made two cups of au jus by mixing together 2 cups of water with 2 teaspoons of the beef base.  My friend who gave me the recipe said that she just makes the Lipton Beefy Onion Soup mix on her stove top and places all the chopped meat into the soup.  I added my soup base mixture to my crock pot and set it to low and added the meat to slow cook for a couple of hours because I had lots of time.  If you are pressed for time, by all means, just put the meat into the hot soup on your stove top.  (Also, my family does not like their meat rare and the deli meat I purchased was very pink.  That was taken care of by cooking in the hot au jus mixture.)

When it comes time to assemble the sandwiches, use tongs to get the meat out of the soup and place it on the sandwich rolls.  Top all the sandwiches with Provolone cheese.  I used two pieces off Provolone per sandwich.  I lined a baking sheet with foil and I toasted the sandwiches under the broiler for not quite 2 minutes until lightly toasted brown and the cheese was melted and bubbly.

Be careful not to burn them! Not quite 2 minutes and when I opened the oven the edges of my sandwiches were just starting to burn and the smoke detector went off!!

Pour the remaining au jus into small dipping bowls and serve alongside the sandwiches. 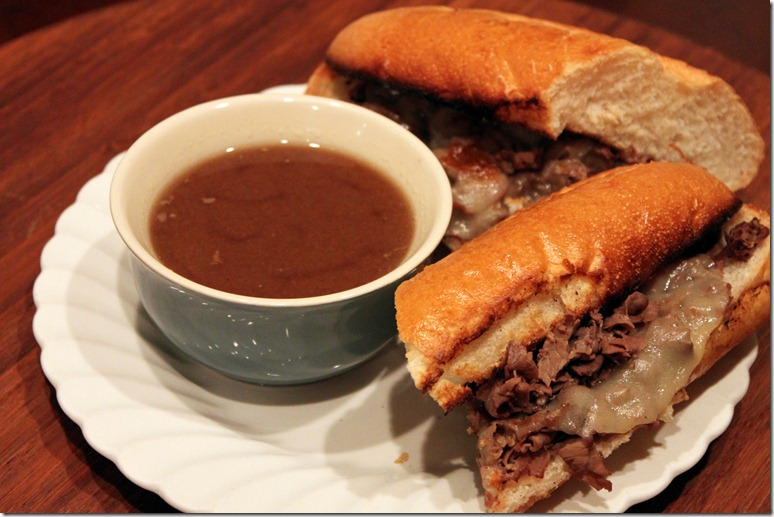 I am not kidding when I say these are delicious.  There are some things you can order in a restaurant that are very hard to make taste as good in your home kitchen and I used to consider a French Dip sandwich something that was better eaten out in a restaurant.  Boy was I wrong on this one!  These are as good if not better and I will be making these again very soon.  Too good not to share!

Posted by Lisa@Pickles and Cheese at 4:01 PM

Oh...when you see your costumer ..tell her THANK you even from me :D , have a great weekend, hugs, Flavia

Sounds delicious and easy. My favorite kind of dinner. Thanks!

Now, if only I could find a good gluten free roll. I love French Dips! There is a restaurant here in LA that's famous for them. It's a total dive but I remember them being so good!

Had to "pin" this one, Lisa! I LOVE French Dip and have never been able to re-create them. Thanks for the tips!

Love your blog Lisa. Will spend some time here. The French dip sandwiches sound like a perfect lunch for our Labor Day crowd (Always looking for lunch ideas). Thanks for visiting me.

By the way, We lived in Greensboro for 36 years before retiring to our Lake Lure cottage.