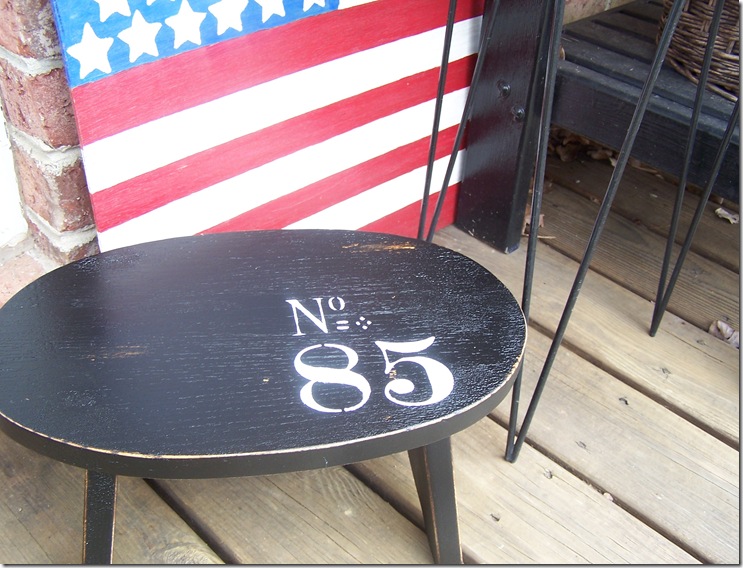 I have a box that I keep out in the garage that I like to put things that I find when I am out bargain hunting at places like Goodwill or Salvation Army that I want to work on later.  This very worn but very well made oak wood foot stool has been sitting in that box for a while now.  I finally got around to giving it the “number treatment”.    I thought about stenciling on the words “RELAX” and even writing “Rest your weary feet here” in French of course  (Reposez vos pieds fatigués ici), but in the end, I went the tried and true “number” route. 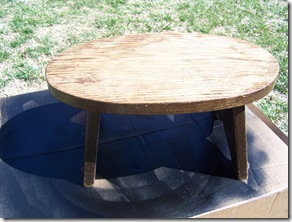 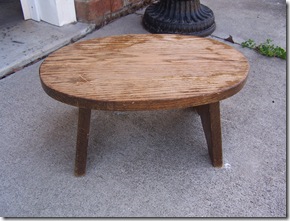 I think this foot stool was was well used in it’s former life.  I wiped it down and applied a couple of coats of Rust-o-leum’s American Accents Black Canyon Spray Paint. 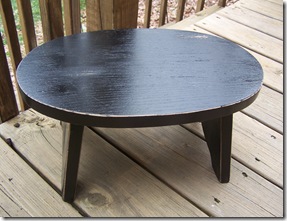 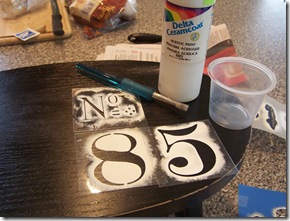 After it dried I lightly sanded all the edges to give it a nicely worn look.  I wiped it down with a clean dry cloth and then took out my number stencils (from Maison de Stencils) and with some white craft paint I stenciled on my numbers.

I get asked all the time if the numbers I choose have any meaning.  Most of the time I just put together numbers based on how they look.  But today I went with the number “85” because it’s the year we got married. 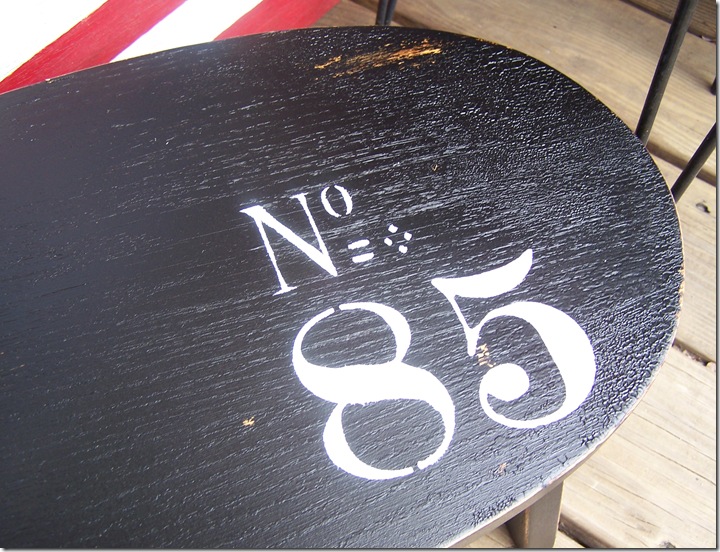 After the numbers dried I gave the foot stool a coat of a clear sealer spray to help protect it.  It gave the foot stool a nice finish but I noticed as it was drying that in some areas it was getting a “crackle-like” effect.   Can you see it?  A happy accident.  Not sure why it was doing that.  Good think I like that kind of look. :)

Posted by Lisa@Pickles and Cheese at 8:28 AM

Love the stool! I love the number and it turned out amazing!

We were married in '85, too, Lisa! I love the simple transformation you did to it ~ it's a cute little stool. I don't usually see anything that looks this good at my Goodwill {when they even have furniture out}.

What a cute makeover~ love the happy accident crackle effect!

Hi there....just popped in from Savvy Southern Style and LOVE your blog. The painted stool is exactly like something I would do. And how GREAT that it "crackled" on it's on. :) The pansies in your previous post are beautiful. That is my all time favorite flower. Good for you for saving them from distress. That's a skill I don't have! Happy Spring Ya'll from Houston, TX

Lisa, this is so cute! The number is the perfect addition!

I would use it on the front porch to set a pretty potted plant on. Nice!

Y'know...I've often wondered if the numbers have any meeting. I love that the stool's numbers have meaning, but I understand putting ones together that look good, too. And I enjoy that slowly you are teaching me French. This is very helpful as we prepare for our trip to Paris whenever he gets a break! Oui, oui!!

That's so sweet! Love the sentiment behind the number! Oh, the stool is lovely!