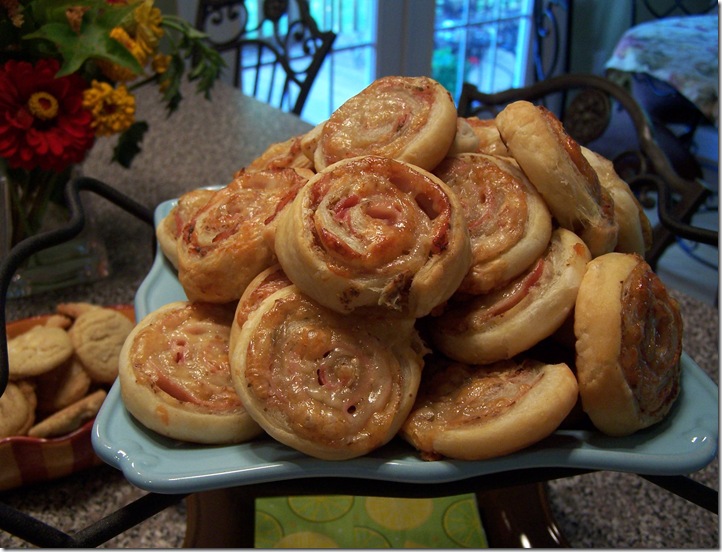 Now before I jump into the Ham and Cheese Pinwheels,  let me start off by saying that I realize that my blog seems to be morphing into a Food Blog.  It’s not intentional but it does seem to be that way lately.  It’s just where my head is these days I guess.  :)    I seem to do everything in spurts.  I get obsessed with certain things.  A new stencil….BAM….5 blog posts in a row about stenciling.  French Macarons…BAM…post after post of my macaron baking attempts.  One found piece of junk from Goodwill transformed and BAM…10 trash to treasure posts.  Stick with me….something besides food will grab hold of my attention.  And and if not that’s okay too!

So, back to the post at hand.  It was my turn to host the Mah Jong group this week.  The last time it was my turn to host a snow blizzard (and I do mean blizzard, which is very rare for these parts I might add) hit and only two people who live in the neighborhood were brave enough to come.  Boy, did I have leftovers after that night!  Well, this time things turned out much better.  Click HERE if you want to see what I made that night.  The Feta Dip alone is worth the click.) :) 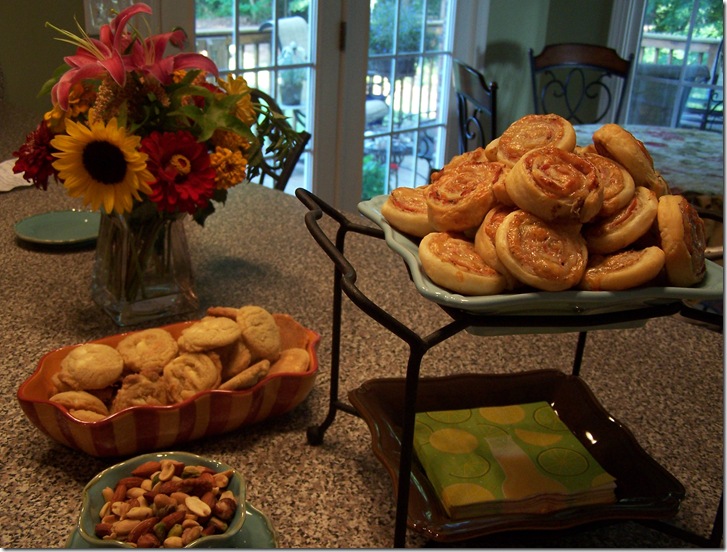 One of the things I made this time were these Ham and Cheese Pinwheels.  I tried making them for the first time a few weeks ago for a Happy Hour we were invited to after seeing them in Ina Garten’s Back to Basics Cookbook.   I thought I would get fancy and brushed them with an egg/water mix thinking it would make them look better when they came out of the oven.  Big mistake!  The egg/water wash actually made them so brown that they looked burned.  This time I left them alone and I had much better results.  They were very good.

A few weeks ago I was at a cheese seminar and was given a few very nice pieces of cheese to take home with me.    Lucky me!  One of the cheeses I brought home was a nice piece of Emmentaler.  Emmentaler is similar to a Swiss cheese and is often used in Fondue and melts nicely.  I grated up the whole piece and used it in the Ham and Cheese Pinwheels. Gruyere is also a wonderful choice to use here too. Thaw the Puff Pastry according to directions on package.  Flour your counter surface and rolling pin lightly roll out one piece of your puff pastry until it’s about 9 x 11 inches.  Spread the sheet of puff pastry with Dijon Mustard.  Lay pieces of the sliced ham on top of the mustard.  Sprinkle with about half of the grated cheese.  Roll up the pastry/ham/cheese along the long edge and roll it into a log.  Wrap in plastic wrap and refrigerate at least 1 hour.    Repeat this process for the 2nd log and place in the refrigerator.

After the logs have had time to chill, preheat your oven to 400 degrees.  Slice each log in half and then keep slicing each half in half until you have about 16 pieces from each log.  Place on a baking sheet lined with parchment paper.    Bake for approximately 18 minutes checking on them to make sure they are not getting too brown after 14 minutes.  (Mine actually took 20 minutes.) 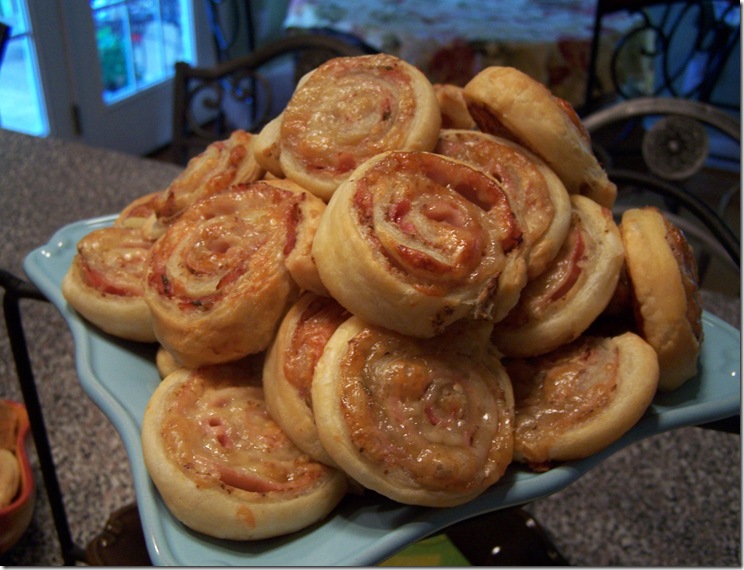 Posted by Lisa@Pickles and Cheese at 2:48 PM

That sounds delicious! I might have to remember that for Bunco in August. Wouldn't that be good for dinner with a nice salad?

You can keep blogging about food. I like it!

Ham and swiss is one of my most favorite sandwiches ever, Lisa. I would love to be able to have these pinwheels. I probably could eat the whole dish myself! I have got to find a gluten free replacement for things like the pastry so I can make these for myself.

Wow these do look exquisite! Hey I thought it was a food blog? :)

Wow these look so good i am going to make them with my son as he loves ham and cheese rolls Thankyou. yum

They look great, would love to have one now:@)

Well I could pop a couple of those in my mouth and not even think twice! They really look good!!

I just started a 2 day cleanse so this is looking pretty good about now. Love the jars and your herbs in the background too.

Excellent - it doesn't get much more simple than this! Yumolicious.