Found some Pimm’s!  The last thing I wanted to do was drive up to Virginia looking for it  so I did some google-ing and made some more phone calls and I finally found it much closer to home.  Shame on the guy in the Battleground store for telling me “nobody in Greensboro carries it.”    For anybody living in Greensboro, you can find Pimm’s No. 1 at the ABC Store on Market Street in the Marshalls and Food Lion shopping center. 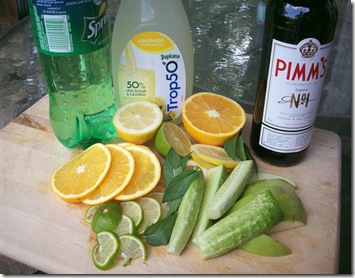 So, we brought home the Pimm’s and made up a pitcher from a recipe found online.  It really is like a sangria.  A British Sangria.  The recipe called for a sliced up cucumber which I thought was unusual and I thought I would love.  But really, not so much.  Husband hated it!  Next batch I made will be sans cukes!

The deer have finally found my garden and seem to come while we are sleeping and select something different each night to feast on.  Last night they ate almost all of my Swiss chard. And trampled two tomato plants.   :(

It’s been so hot and humid that I just can’t make myself go out and tend the garden.  It’s starting to look like a deer-chewed jungle.  And the evil Bermuda grass is invading big time.

I went to a party last week and the hostess served individual cups of dip with crudites/sliced veggies.  It looked so cute and that way everybody was allowed to double dip! 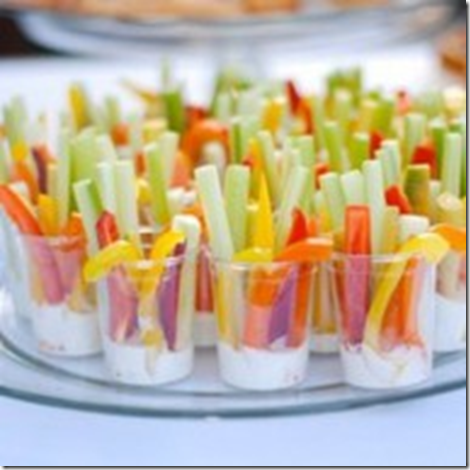 I’ve taken to adding 2 shakes of cinnamon to the filter basket when making my coffee.  It adds just enough cinnamon for me to know it’s there and I hear cinnamon is good for you.  Even better.

Progress on my braces is good.  The Ortho said I was heading into the “final detailing stage” and put stainless steel wires on both the top and bottom.  My teeth are very tender right now.  But, I can see my new smile emerging!

Posted by Lisa@Pickles and Cheese at 7:57 AM

This Pimm's, is that what is called a "Pimm's Cup", Lisa? I remember that is the drink Ricky Gervais ordered in the movie Ghost Town {one of my favorite movies} and wondered what it was.

Glad you found your Pimms! I love the idea of the crudite in a cup, my sister in law was the first I saw do it and she got the idea from who else....Martha Stewart!

Glad you found the Pimms. I don't think I've had it with cucumber in it, usually just a slice of orange! Love your pretty apron:-)

Just popped over from the Blue Ridge Gal......and I must tell you, I loved visiting.
The dip and veggies in a personal cup is a fantastic idea, and I LOVE your 52 reasons card gift.......very, very nice.
I may try that one. Actually I will try both ideas.
The hot honey sounds tempting, too!!
Glad I stopped by.

Yay on the Pimms!!

I add cinnamon and nutmeg to my filter basket. Makes me feel as if I am having a gourmet coffee instead of just the everyday stuff.

Oh my...I'm so glad I stopped by to catch up on your blog. I'm having a party Friday night and the little crudite cups will be there!!! Thanks!

Just popped over after seeing you on Pleasant Home. Here's my trick for tender braces teeth from my younger years. Take two Advil and then pop a piece of sugar free gum in. At first I could only tenderly bite down every couple of minutes but after an hour or so, no more tenderness and I would be great until the next appointment. Good luck.