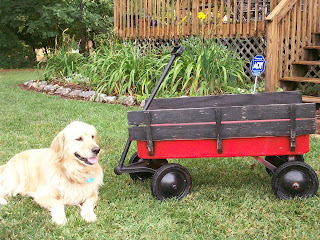 The truth came out the other night while we were eating dinner on the deck outside with the kids. They started giggling when I mentioned something about our little red wagon. All these years we had been blaming the neighbor kid for defacing the wagon when all along he was a somewhat innocent bystander.
It seems my husband and I were at a neighbor's house having dinner or drinks one night and left the kids at home unsupervised...well they were supposed to be supervising each other. Boredom set in after playing their nightly game of Manhunt....in my day we played Kick the Can and Hide and Go Seek but today they play Manhunt and they played that game almost everynight that summer. Hormones were kicking in and suddenly the girls hanging out with the boys and so we always made sure our daughter included her brother as a buffer. Surely, nobody could get in trouble if little brother was tagging along right? Anyway, someone spied a couple of cans of black and green spray paint in our garage and they started laughing about the show on MTV called "Pimp My Ride". Ahh MTV, the quality entertainment provider to our teens. "Pimp My Ride" seems tame compared to what they are showing today but that is another subject for another day.
Well one thing let to another and they thoroughly enjoyed themselves as they removed the wood sides and freestyle painted my treasured wagon. When they were done it looked like the graffiti filled wall in a NYC subway station. No part was left untouched. They even painted over the white wheels.
I loved that wagon. We used it to pull our two adorable towheaded children around in it. Santa delivered that wagon and we took it to the zoo. They pulled their dolls and stuffed animals around in it. We decorated and pulled them in it for the Fourth of July parade. Lately, I had been using it to help me in the garden to haul around dirt and shovels and such. I even think somewhere in the back of my mind I thought I was going to use to pull around my grand children in someday. But, that was not to be.
"Ugly" doesn't begin to describe it. It was embarrassing hauling around my "Miracle Grow Potting Mix" and red geraniums around in my new ghetto wagon and because they removed a couple of the wood sides, my stuff kept falling out the back as I pulled it across the grass. The wagon was a sore subject around our house for a long time. "It wasn't us who did it" they insisted. "We tried to stop "him" but he wouldn't listen" they would whine together. And so all this time we thought it was the neighbor kid when all along it was my own two cherub faced children.
Guilt must have got the best of my daughter because she tried to make it up to me a couple of years ago with one of the nicest Mother's Day gifts she ever gave me. At night when I wasn't paying attention, she attempted to restore it back to it's original red state with white wheels...although in her minds eye she must have thought they were black because that is the color she painted them. She scrubbed it clean and painted it and got it as close to the original as she could. The back wood panel is still missing and the sides are rickety but it doesn't burn your eyeballs to look at as it once did. It would never pass a safety inspection and I wouldn't dare put a child in it but it still works well for the garden and it still makes me smile whenever I look it. I wish I had a before, during, and after photo to show you but my anger prohibited me at the time from documenting their vandalism. Kind of wish I had a picture of it now. But you get the idea and the dog doesn't seem to mind.
Posted by Lisa@Pickles and Cheese at 4:29 PM